You can’t make this improbable story up.

In the Fall of 2018 Pere Vil, the Episcopal priest in charge of St. Francis Parish told La Gonave Haiti Partners Board member Leslie Jordanger that the parish needed to buy a dump truck. And not just any dump truck. A single axle Mack 685 R with a “twin stick” (2 transmissions – one regular and one heavy duty). Why the request? Nine of the ten communities served by the parish are in remote areas, most up steep mountainous roads with severe erosion, huge boulders, and harrowing hairpin turns. Each community has faced daunting logistical challenges getting construction materials in place to build church/community centers, schools, latrines and cisterns. There was no source on the island that could reliably handle the job. If the parish had its own truck the problem would be solved, and when in between construction projects the truck and its driver could be profitably rented at other construction sites.

Leslie called Tim Exley, chair of the Partnership’s Infrastructure Committee and he started what seemed like a quixotic search. Tim educated himself by visiting a Mack Truck dealership and quizzing a salesman who understood what was needed. In order to withstand the rough terrain the truck would have to be one manufactured in the 70’s or 80’s before the introduction of double or even triple axles and fancy electronics. Leslie also reached out to the partnership’s Development Committee and member Meredith Moseley devised a plan to raise funds needed for the purchase. By the summer of 2019 things began to happen. 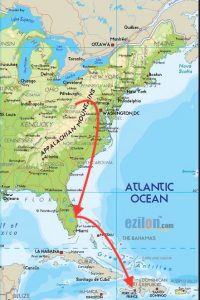 Tim had hoped to find what was needed on mainland Haiti but no such truck was available. He trolled the internet and in June on Craigslist found what is now known as “The Beast” in remote Keyser, West Virginia. Within the week Tim drove 675 miles north and after seeing the 1987 model working on a job site, he sealed the deal with owner Jeremy Boinovych, who supported the effort by bending over backwards to get the truck ready to face the challenges awaiting it on la Gonave. At the Partnership’s Annual Conference in July the necessary funds were raised. The Diocese of Haiti engaged Vundla Sikhumbuzo to handle the incredibly complex negotiations to get the truck through customs and shipped from mainland Haiti to La Gonave.

Partnership Board Member Doug Freeman had years of experience shipping huge containers filled with pre-packaged school lunches from the U.S. to la Gonave. He introduced Tim to shipper Robert Boucek who in February 2020 sent a specialized trailer to Keyser to take the truck to a port in West Palm Beach FL and from there by ship to Port Saint Marc on Haiti’s northwest coast. It took over 2 months to get the paperwork needed to get The Beast to its new home and on April 28th it met its new driver, Alexis Arthur. Alexis drove the truck onto a boat capable of getting it from Saint Marc to la Gonave and at 10 PM that evening Pere Vil saw his dream become a reality.

On April 30th Pere Vil wrote a note of thanks to the Partnership. It said in part: “I cannot find the right words to tell you how important it is the gift of this marvelous dump truck. Without any hesitation you embraced (the idea) and here today the idea has materialized. You are an excellent team. For my part, I will do my best to keep the truck in good shape and use it for the advancement of our work in la Gonave.”

Since its arrival The Beast has been hard at work on the construction of a new parish middle school and numerous smaller projects in parish communities. Truly, it takes a village . . .