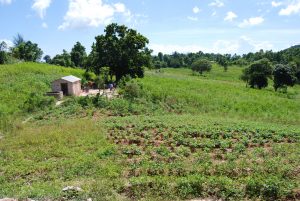 Two months ago, on February 21st, shock and sorrow reverberated around the world as news of the sudden death of Dr. Paul Farmer was announced. Paul Farmer challenged us all to think of humanity as one, not people and countries divided into rich or poor.

For many of us, Tracy Kidder’s book “Mountains Beyond Mountains” was our introduction to Haiti and to Paul Farmer. But actually, Paul’s influence on La Gonâve Haiti Partners goes back to the earliest days of the partnership and his friendship with its founding Haitian partner, Episcopal Priest Père Fritz Valdema.

Let Père Valdema and his wife Carmel tell the story … Paul Farmer came to Mirebalais in Haiti as a young student after finishing college. He looked for someone to help him develop his vision. He arrived on a big tap tap one Friday afternoon during the Lenten season. Père Fritz Lafontant, the Priest-in-Charge, and Père Valdema, the priest assistant, were just returning from church following services. Paul’s vision to help those most in need found its home that day. After Paul started his studies at Harvard Medical School, he returned to Mirebalais to continue his vision in the small community of Cange in the Central Plateau. When Père Valdema was transferred with his family to the island of la Gonâve in 1988, Paul Farmer was the first person to give him support for his new ministry. Paul provided the resources to build a cement wall around the church and school in Anse-a-Galets. Farmer’s vision of healthcare as critical to community development inspired Père Valdema to start a small clinic in the mountains at Nouvelle Cité. Carmel Valdema, a public health nurse, followed by building a network of trained Community Health Workers and beginning mobile medical clinics to 10 communities on the island of la Gonâve.

In 2013, the seed of a maternal health program for La Gonâve Haiti Partners was nurtured when Deb Griffin, partnership chair, and Lee Wilder, partnership treasurer, visited Dr. Farmer’s Partners in Health hospital as it was about to open in Mirebalais. With the support of Père Vil, the maternal health program – with two Haitian midwives trained on the mainland – was launched.

Several us from the partnership were fortunate to attend a Haiti Episcopal Connection conference at the Hotel Montana in 1998. Dr. Paul Farmer spoke at the meeting and opened the eyes of many of us to the essential ingredient of a beneficial international partnership. He looked out over the group of “church ladies” (as he called us) and reminded everyone that the Haitians are smart, resilient and have a vision for their country. It is our job to look and to listen and to learn from them.

“Clean water and health care and school and food and tin roofs and cement floors, all of these things should constitute a set of basics that people must have as birthrights.” From Mountains Beyond Mountains.