“….together we can do so much.” That is the way Helen Keller stated it. In Haitian Kreyol the proverb is “Men anpil, chay pa lou.” Many hands make work light. 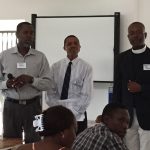 February of this year, 2015, a gathering of 40 people met at the Wesleyan compound on the island of La Gonave for the 3rd annual Summit Meeting of NGOs and other groups working there.  As before it was a glorious time of sharing and collaborating to be sure that the resources we are providing are firstly, what the Haitians need and want, and secondly, that we are using those resources wisely and not duplicating services.

The meeting was productive and one of the most thrilling things to come out of the meeting was the announcement that the Minister of Health for Haiti, Florence Duperval Guillaume. 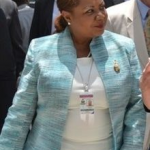 Madame Guillaume had visited La Gonave in January and met with Dan Irvine and the staff at the new Wesleyan Hospital. She was impressed with the efforts to provide healthcare to the people of the island. When she was told that there was a group of NGOs who were meeting annually to collaborate and coordinate services she was most pleased. She confirmed that she was eager to work with us and suggested that the Wesleyans designate a space in the hospital to be the new Office for Public Health.  She said that it would make it much easier for the ministry to work with the people if there was one entity collecting data and making requests for needs.  Dan Irvine announced at the meeting that this was in the works, and in a subsequent conversation said that it will be opening soon (May 2015).

This is a huge step for those of us who have struggled to know how to get access to the many things that we hear are provided by USAID and WHO that are generally dispensed through the Ministry of Health. In the past most of that went to World Vision for distribution and it had been difficult to have any working relationship with them on that distribution.

With the hub now being located at the Wesleyan Hospital, we can begin to coordinate services and distribution throughout the island by way of our participating partners who are connected through the summit.

For now we only have cursory information, but medical teams going to the island to work should contact the Wesleyan Hospital to register. Here are some of the things that will most likely be required going forward:

1. Register your team and turn in copies of all medical certification to the Department of Public Health

2. Let the Hospital know what kind of speciality docs/auxiliaries you are bringing in case they know of people who need to be seen.

3. Obtain from them the contact info you need to report follow up visits or further treatment needs.

4. Inquire about obtaining any medicines you might be distributing through the hospital. This is important as we are trying to avoid having patients who have been put on a script that cannot be refilled once you leave. There are many first generation drugs that are still effective in Haiti and our goal is to follow the formulary put out by the Ministry of Health uniformly on the island.

This is a huge step towards a standard of care, coordination of care and recognition by the government of Haiti of the dire situation of healthcare on the island. If you have any questions about this or want more information as this unfolds feel free to contact the La Gonave Haiti Partnership or the Wesleyan Hospital.

Attached you will find the minutes from the summit for other information and action items.