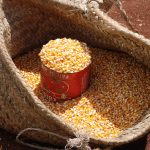 Only a week back from my most recent trip and the days roll by with images still fresh. No matter how often one goes during the “dry season” it is startling anew to see how insecure the food source is for all of La Gonave. On hillsides where one sees congo beans, melons, corn and millet in the fall, there is dust, dry stalks and brown. At the market there are big brown roots, dried beans and ground corn. Even though a few mangos are beginning to appear, we are months away from carrots, cabbage, beans, fresh corn and avocados.  Everyone is hungry…even if they don’t say so. A Haitian friend once told me that “even the best dressed person, who one would think if anyone had eaten, he had eaten, is hungry during the dry season.”  With a group of new people it is impossible to describe the difference between October and March. In March it all looks desperate and hopeless, while in October there is food and one can imagine solutions.  This time I was more in tune to how the people never change….just the soil, the market, the dust.  The people remain hospitable, faithful, present.  Three of the nights we were there it poured down rain and it was as if the island was sighing….just another month and we will plant again. 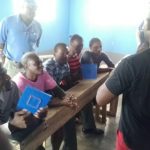 Every trip there are bags packed. Energy spent trying to find just the right thing to take, what will be needed, what will be helpful? Large duffles were delivered to the school we were to paint and sat locked up all week as we sanded, painted, played with kids and got  to know the families living around the school. Near the end of the week there was concern that the things, mostly school supplies, needed to be sorted and organized. As we began to unpack, joyous over the wonderful art supplies for the kids, and, taking time to make an birthday card for one of our translators, it became clear we had some teaching tools that had been included. Geoboards for students in beginning geometry (am I the only one in the world who did not know what that was?), mats with felt shapes and dry makers to teach primary school students shapes and red plastic covered magnets with paper clips and other metal objects for demonstration.  The teachers were all there because it was technically a school day and we brought them all in to demonstrate how the teaching tools could be used. Their normal day would be using the one thing they have…a falling down, very rough blackboard with the smallest piece of chalk.

We pulled out one of the red plastic magnets and asked if anyone knew what it was…no answer. Not sure I would have known, either. Then we threw a paperclip at it and it stuck. A slim man (see above paragraph) broke into a smile and said, “Leman.”  I asked him what he taught…he said, “Science.”  “Do you teach about magnets?” I asked. “Yes” he answered, “but I have never seen one.”

How does one dream big enough to continue to teach science on a remote island in Haiti with nothing but a board and chalk? Having contemplated lack of water, lack of food, lack of healthcare…..I am still learning. 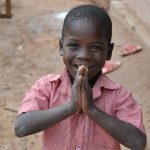 I returned just in time to attend a bi-monthly meeting of the Partnership. Tired, and a bit over-whelmed, I went into the meeting with less energy than normal. As the room filled and we began to report I could feel my energy building. There were new visitors making a commitment to be a part of our group. There were folks who have been with us for a year or two reporting on the arrival of our rice shipment so the kids can begin receiving lunches by April 1st. There were the “stalwarts” who have been in since the beginning, listening to each report, eager to build on what we are already doing.  And, there was a lovely devotional that sums up why we continue to be excited about what we do.

“This partnership is not a vertical organization” he said. “It is a spiritually connected, horizontal, relationship-based group that continues to send out fingers and make new relationships with like-kind.”

If a teacher who is hungry can walk hours in the dust to teach the science of magnetics having never seen a simple magnet….who am I to get tired?