As we approach the “official Hallmark” Mother’s Day it seemed like a good time to honor how Haitian mothers  contribute to their families and their communities.  There is a wonderful Kreyol saying that Haitian women are the “potomitan” or center pole of the Haitian family. The term comes from an old story about courage and strength, especially at home, but also in the public space.

There are few jobs on earth that require more courage than being a Haitian mother. Often one rises early to fetch water and build a fire to feed the family…if food is available.  Often, but not always alone, they are responsible for the food, education and clothing of their children. In a country where education is hard to access and even harder to pay for, women meet this challenge and know it to be the only way their children may have a better life.

As a tribute to these women we would like to make their contributions known. Some have given birth and are the “potomitans” of a nuclear family. Others have not borne children, but have taken a more public position of “potomitan” in their communities. They are what holds the fabric of society together in a country that is riddled with hardships.

Edith Tranchant (middle) teaches Kindergarten in a remote village on La Gonave. She has a child of her own, and every day she works to see that the children at the school where she teaches are getting what they need. After beginning to earn some money of her own in the women’s sewing project there, she used some of that money to buy fabric for school uniforms, a difficult thing for families to provide for their children. She bought the fabric in Port Au Prince, brought it back on the ferry and began to use the sewing machines provided by the partnership to sew uniforms for the children of her school for just the cost of the fabric. She donated her time so that the children of her school  could have the dignity of a fresh uniform for school. 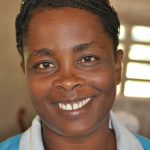 Berline Salomon teaches school with Edith. She has children of her own and when they found out that Ties That Matter, lead partner in the sewing project, would provide a dividend to the community for the work the women had done over the year, they decided the money should be used to buy books for the school. The children had never had a school book. With this money the school now has enough books for almost every grade to have access to books. Berline has seen to it that every book is covered with a protective cover and that the books are available to each student. 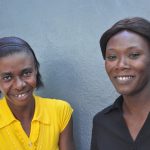 Soisilia Bertrand (right) is a woman from another village who just last year was chosen by her community to be trained to be their Community Health Worker. She was so enthusiastic that when she received her book, “Where There Is No Doctor” as part of her training, she went home and read it from cover to cover. Lucky thing for La Gonave because just 6 months later she was able to pass a test and  to leave the island to attend a school for Skilled Birth Attendants in Hinche. By November she will graduate and return to LAG to begin her new profession. While she has no children of her own, she has discovered that she loves delivering babies and looks forward to being a force in better healthcare for the women and children of La Gonave. A potomitan in her community and the larger island.

Vilana Cherissaint (left) is in school at Hinche with Soisilia. She left her two children with her family in order to become a Skilled Birth Attendant. While it has been very hard for her to be away from her children, this is not an uncommon scenario for Haitian women. Many times they have to be away to work and meet the needs of their families. Vilana knows that this will allow her to pay for her children’s education and to take a place of respect in the community. She has discovered that she loves to learn and looks forward to going back to La Gonave and teaching other Community Health Workers about safe prenatal and childbirth practices, thus improving healthcare for all the women on the island. 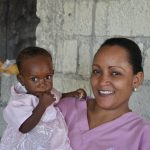 Esther Beaujolais is a nurse at the Bill Rice Clinic. Two years ago when the partnership had an opportunity to send someone to be trained with Meds and Food for Kids (the Medika Mamba program that fights malnutrition in children 6 months to 4 years)  Esther volunteered to go to Port Au Prince for the training. While she has not given birth, she now has a hundred children all over the island that she has nurtured back to health. Traveling over terrible, unpaved mountain roads she has treated children, educated mothers and trained Community Health Workers to recognize and treat the signs of malnutrition. She is not just a medical technician, but has at times asked for help from the partnership with clothing for the children, a book on nutrition, other food additives and vitamins for marginal children or the other children in a family receiving her care. She is the “potomitan” of our Medika Mamba program as well as her community. 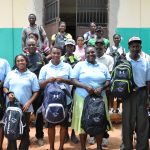 Monique Belgarde (center yellow skirt) cannot be left out just because we don’t have a close picture of her! She is a fierce potomitan in her community as well as her lovely family. Married to the lay leader of one of the communities she is not only a Community Health Worker, she is an Adult Literacy teacher and a civic dynamo. While she has never uttered a word about a personal need, she is quick to stand up in any meeting and talk about what the least of her neighbors needs. She works tirelessly trying to learn and act on what might be available to make the lives of others better. In a notable field of potomitans, she is the epitome of the courage and devotion of Haitian women.

Happy Mother’s Day our friends. You make us realize that every day should be Mother’s Day. You are the fabric of our communities, our moral and spiritual compass and our companions on what is, at times, a difficult journey.

To all of you that help support the work of the La Gonave Haiti Partnership, please know that these are the women who are the “potomitan” of what we do. There would be no partnership without them. Your donations tell them that what they do is important to the larger world, not just their communities.