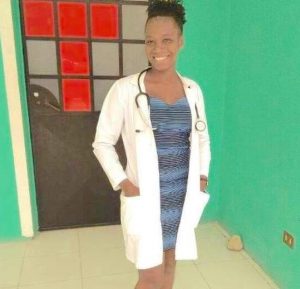 When Judette Desbouquets was six years old, she received her first and only present. Her good grades put her first in her class, and the faculty presented her with a toy first aid kit. Rather than being thrilled with the gift, Judette remembers, “The other two students who were recognized received dolls, and I was sad because I would have preferred a doll, too. When the teachers noticed I was upset, they built me up by saying, “You have a first aid kit so that you can look after your friends’ children. All of a sudden, I was bursting with excitement, and I kept repeating that I wanted to be a doctor.” Judette, now 27, is indeed becoming a doctor, but she will tell you that her journey has been an uphill climb.

Judette (center) grew up in her grandmother’s house with her mother and four sisters in Lotoré, a community in southern la Gonâve. “My grandmother provided for us,” she says, “even though her own economic situation was not good.” Although Judette is quick to credit the Episcopal Church of Haiti and La Gonâve Haiti Partners for working with members of her community to build her primary school, she adds, “There are a lot of things that I would like to change about Lotoré like adding a hospital, a secondary school, running water, and especially drinking water.” She describes her grandmother’s house as being “old and the walls were crumbling.” Still, she says, “This was the only home we had, so we stayed as if it were perfect. We lived with a shared faith in God and the sense that love reigned.”

Judette was selected to go across the Haitian island of Gonâve to St. Francis d’Assisi, the Episcopal secondary school in the port city of Anse-a-Galets. Given that most people on la Gonâve travel on foot or by donkey, the school was a long way from home. Judette says, “It was an honor for me to study in this school…” but she missed her grandmother terribly. In spite of her goals, Judette fell short of expectations and failed to qualify to continue her secondary studies. Defeated, Judette returned to Lotoré. “I was depressed and ashamed,” she shares, “but my family and friends supported me. Even though I was struggling, I had faith in God.”

The head of her primary school remembered Judette’s intellectual curiosity and promise. When the opportunity arose, he set her up to participate in a mobile health clinic.  Judette notes that this experience changed everything. “They taught me how to conduct screening tests so that I could work in a laboratory. I started working to help my family.”

As Judette’s confidence grew, she went back to her studies, and now she is in medical school on the mainland of Haiti. “When I become a doctor,” she says, “I would like to specialize in pediatrics and/or surgery, and then return home to help people in my neighborhood and those in need, because I do not want other children to live the way that I lived.”