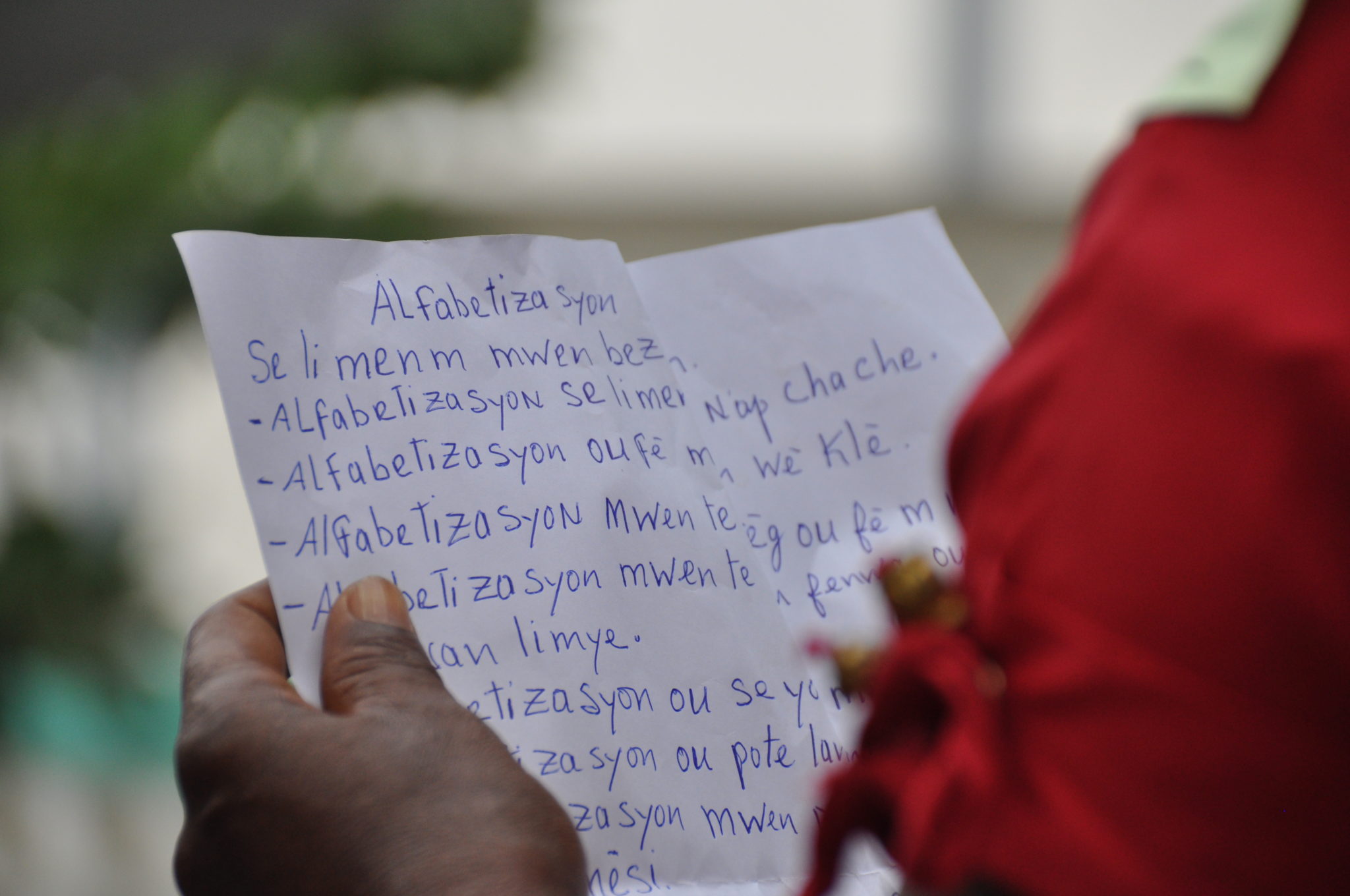 Many who are last…

One of the major tenets of Christianity is that “many who are last shall be first.” The Partnership believes this as well. We believe that the poorest deserve the best because their need is greater. The term, “preferential option for the poor,” was first used in 1968 by Father Pedro Arrupe, a Jesuit priest who also believed that Christ commanded us to do for the least among us.

Every day we believe this. But, some days we have the breath-taking privilege to see why this tenet rings so true.

This past November we were honored to be guests at the first island-wide graduation ceremony for the students of the adult literacy program, named ALPHA (a Haitian Creole acronym for Alfabetizasyon the name of the program).

On a very warm day that was threatening rain and wind, about 150 people came from distant villages over terrible roads. They were dressed in the most dignified and festive way and had taken months to prepare for this ceremony.

They were people we know. People who maintain security at the clinic. Women who cook lunch for our students. Merchants who sell simple household items to their neighbors to get enough money to buy school uniforms for their children. The women who clean and sweep up around the schools and churches just for a few dollars a month. Farmers who toil long hours in the sun.

Many of the students were older than their teachers. Men and women of immense courage and tenacity with a common goal…to learn to read. There were wide satin ribbons across their chest to denote the name of the community where they lived. 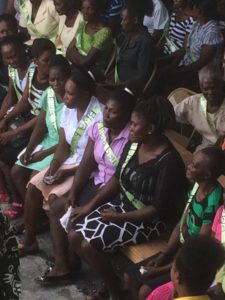 Each community had prepared a song, a reading, or appointed several speakers. They wanted everyone attending to know how important this program was and to document how something that is very low tech and relatively inexpensive can change the lives of so many.

We were all in tears.

And, as I sat there, I wished that everyone who had ever trusted us with even the smallest donation could see what a small gift can mean to the people of La Gonave who benefit from those donations.

Here is what we heard:

“It used to be that when I went to the hospital to see the doctor I would take a number just like everyone else, but often I was the last person seen because I could not read my number and when they called it I would not know. So, I would sit all day no matter what number I had and I would be seen last. Now, I know my number, I can sign in with my name, and when it is my turn I get seen and can return to work or home.”

“When my son and his girlfriend decided to marry we had to go as his father and mother to sign for the marriage. The bride’s parents were there as well. When the bride’s mother was supposed to sign she looked down and said she could not sign her name. The registrar said, ‘That is OK, Mommy, I will sign for you.’ But, when it came my turn he looked at me and said, ‘OK Mommy, I will sign for you as well.’ I took the pen away from him and said, ‘Thank you, but I have been to ALPHA and I can sign for myself.’ It was my proudest day ever and my son was so proud of me as well.”

In a song that the next group sang they told us that they had studied, they had gone to class, and “now for the first time in our lives we are just like you!” It is hard to convey what it felt like to be surrounded by 150 people who had been liberated from a life of feeling “less than” and being taken advantage of by others because of their lack of literacy skills. They were so joyful and so grateful! All for something we take for granted everyday. 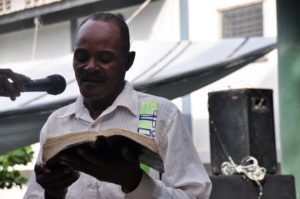 Another man made a great show of confidence by closing his eyes and opening his bible to an unmarked passage so he could prove to us that he could now read the scripture by himself and not have to depend on others to tell him what was there.

It went on for 3 of the shortest hours I have ever spent. Each person relating their joy at being given an opportunity to turn back the clock and get the education they had been denied as children.

And, for a final, hilarious but touching moment, the second verse was “Mesi, Lee Wilder, Mesi” as Lee has worked mostly alone to make this program work. We all had a good laugh…but it was much deserved. I would only add one other verse, “Mesi, donate ou an, mesi, donate ou an.”

Thank you, our donors, Thanks!!

These moments are why we do what we do and you are what makes this possible.