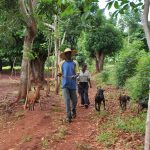 A well known verse from Matthew. And then there are the mind games we play: The poor are always with you. You can’t save the world. Sending food only makes matters worse. Is it sustainable?

But Matthew doesn’t play games with us. He goes on to say that when God responds to us the answer will be, “…whatever you did for one of the least of these brothers and sisters of mine, you did for me.”

Now, it appears that I have “gone to preaching” as we say in the South, and everyone knows I am ill suited to that task. But this is the conundrum that is Christian Development today, and we had a good dose of it this winter.

In early March we received a formal letter from all of our lay-leaders in each of our ten communities telling us of the extreme hunger they were facing due to the third year of a drought. These communities are all farming communities in the high mountains of La Gonave; cut off from most commerce and many hours travel from what is available in Port au Prince.

After meeting with Pere Vil and much discussion by the Board it was decided that we would furnish emergency funding to buy local rice, beans and cooking oil. Upon realizing that the need was beyond this initial response we arranged to send a shipment of fortified rice packets to be distributed until the crops could be planted and begin to produce. One can know all the good development practices available, but when faced with hungry families one has to decide the course of action.

When we sent out the plea for emergency funding the response was overwhelming. More than we would ever have expected came in to pay for the shipment of rice. With the emergency response in place we turned to the problem of long-term hunger and food insecurity on the island. 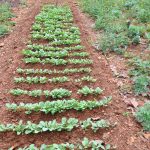 We had a three year relationship with the Friends of Matenwa, a group working in that community on LAG and doing smaller more sustainable gardening. With a grant from Beyond Borders, another group we have worked on collaborating with, Matenwa had put a garden into one of our communities, Nan Mango. That garden has been hugely successful and had produced throughout the year. The training had been a true gift to that community. We began to think about how that knowledge could help combat the food insecurity across the island.

As it happens in many farming communities, on LAG the farmers plant huge areas to cultivate and they sell what they grow as well as using some to feed their families. The areas are too large to irrigate and they are totally dependent on the rainfall. If we could help them by teaching the communities how to supplement with a smaller garden that could be watered by cisterns and enriched by good mulching practices, they would have food to sell year round and food to feed their families. With any extra funding we had received we could repair the cisterns and guttering in the 10 schools and churches. 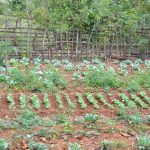 Working with the Diocese of Haiti, Presbyterian Disaster Assistance and Friends of Matenwa we were able to write a grant that will allow all ten communities to engage in a two year training program, each school will get a community garden for training families in the community as well as tools, seeds and follow up visits. We received the good news this week that the grant has been approved and the assessment phase of each of the ten communities will begin this week. We are also thrilled to be expanding our collaboration with Friends of Matenwa and Beyond Borders as we all strive to equip the folks of La Gonave to more food security in these mountainous communities.

God calls us to respond to hunger, to be in community and to be faithful. As we begin this second phase of response to the hunger on La Gonave we are feeling that even in complexity there are solutions that join our Christian calling and good development. Having a good solution cannot be held captive by having the perfect solution.

Many thanks to all who helped us find a good solution…for now, at least.