The Dutch have an interesting phrase that when translated is “a dime on its edge.” This refers to a situation that is thinly balanced and has a chance of falling either way…for good or for bad.

The past 6 months in Haiti (some would argue years) had been “a dime on its edge.” If you have been following these posts you know that the political situation has been volatile, the economy tenuous, and subsequently, the plight of the people, aggravated by a 3 year drought, as bad as we have seen it in the last 10 years. 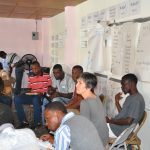 We went down a few weeks ago not really knowing what to expect. We landed the day that President Martelly was to leave office. We had made arrangements to fly directly from Port au Prince to La Gonave to avoid any political unrest on the streets on the mainland. Leaving behind friends and family who questioned our judgement about going.

You see, over the years we have learned a lot about faith and tenacity from the Haitians. Anyone who thinks our work in Haiti only flows one way needs to sign up for a trip as soon as you finish this post. This time, as many in the past, we were humbled by their determination and focus on a better future for themselves and their families.

We arrived with two courageous and determined women, Lisa Hinkley Reyes and Donna Tatum-Johns, both leaders in the teaching method TPRS (Teaching Proficiency through Reading and Storytelling).

I met them last June on the mainland of Haiti and we shared dinner. By the time we were finished we had an enthusiastic plan that they would come to La Gonave and teach this method to the English teachers on La Gonave. By the light of the following day it seemed like a long shot, but we stayed in touch and 7 months later we were on a plane together headed for the island.

None of us knew exactly how many would turn up for the class, but by the next day we had a room overflowing and more standing outside asking to come in. Everyone involved showed up for all-day class and then most of them returned at 7 for a 1.5 hour practice session. For three days they were waiting when the doors opened and just leaving as we locked up. All were hungry to learn, eager to help and a bit frightened of a method that challenged everything they knew about teaching and learning. They practiced on each other and asked probing questions about every part of the method. They worked in class on how to make this method fit with the requirements of the Ministry of Education so as to cover the material on the competency test they give each spring.  And, this from one of the students on his evaluation form: 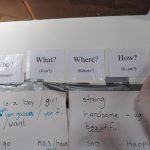 This experience will guide me as a light every time I have to prepare a lesson for my class.  I will think about your gestures, the way you show love for your students, the way you look in their eyes, the way you congratulate them every time they answer a questions.  May God bless you a lot and protect you.  R. Wilkel

But, the most poignant and often asked question was, “Will you come back again? Please don’t just make this one time, we want to learn more and become a good teacher like you.” As is often the case in Haiti, the dime had been on edge and it fell on heads! We have a review class scheduled in May and a second class scheduled for October.

And, on the mainland, the president left office without further civil unrest and a new interim president was appointed.  We went into the next 3 days with summit meetings for other NGOs and Haitian providers, rich with promise for new collaboration and extending health and prenatal care over the island. 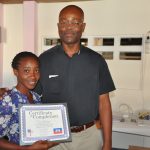 You see, it is not the promise of a good government or false ideas of “saving” anyone that keep us going to Haiti. It is the indomitable spirit of the people. Their willingness to take new ideas and convert them to actions that improve the lives of themselves and their neighbors….and in a climate where the dime is always on its edge.

We have so much good news to tell I cannot get it in one post. More to follow on the progress of maternal health!

Blessing to all of you for supporting this work!