Every now and then we stop, turn away from the problems to be solved, and realize what tremendous progress we are making.

This week we have been gathering statistics for some reorganization of our business model and realized that we are supporting more than 215 jobs on an island with a 95% unemployments rate. As our loyal followers know, we are an all volunteer organization, and our focus is to fund jobs for the people living on La Gonave.

Now, this is most exciting news to us because we know who has these jobs and we see what a difference it has made in their lives. So we are going to share some of these stories with you in the coming months so you, too, can be proud of what you support and how many lives are being positively impacted by your gifts and talents. 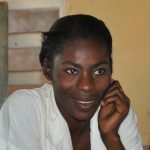 We first met Edit in 2008 up in the hill town of Nan Mango. Dusty, little water, no electricity. She was teaching kindergarten at the school there. No one has ever accused Edit of being effusive, or, maybe even friendly, at first meeting. She is tall, elegant, and has a skeptical stance when you first meet her. She was in her early 20’s, newly married and had no children of her own.

Our first real glimpse of her talents came during a church service where she was the leader of the children’s choir. Her voice is resonant and stunning. She commanded the children’s attention, was stern in keeping them still and in order as they sang, and gently laid a hand on each shoulder as they filed back to their seats, just to let them know they had done a good job.

It was evident that while it might take some work to get to know her, she would be worth it.

Over the next couple of years she attended the meetings we had with the teachers. She lobbied for her children and their classroom needs, and, over time, began to meet us with a hug when we would arrive and let us know she wanted to show us what she was doing with the children in her class.

About the time we started a women’s sewing group in Nan Mango as a way for the women to make extra income. It was clear that Edit and her husband were expecting a baby, and it was clear she was very eager to be a part of the program. She was eventually chosen by her peers to be their leader and spokesperson.

Deadlines were set for when we were to pick up the sewing they were doing and Edit always had the goods ready. They would be counted and she would know exactly what we owed the group.  As one can imagine, it was not without controversy at times, but she was fair and determined in her negotiations.

Shortly after she began making some extra income she went to Port au Prince and bought school supplies to keep in her home and sell to students and neighbors who might need them. Going to a large city requires a very long day including a motorcycle to get to the dock, a long ferry ride and a bus ride into the market once you get to the mainland. It is not easy to get what your family needs on La Gonave. Edit had found a way to take her new earnings and multiply them.

About a year later we arrived in the main town of Anse-a-Galet on La Gonave and met Edit in the street near the town square. She told us they had moved their young child down from the mountains to the larger city for better schooling opportunities and for Edit to take another, better paying job. She, with a rare smile, told us that it was her sewing money that gave them the boost to move to a place with better opportunities.

In town she organized a small group of women into a sewing group and began to help them make money as well. As the sewing project grew, she would work with her contact from the US,  meeting with him to help him coordinate the sewers on the island.

Edit and her husband put their child in school and bought a motorcycle so they could get around town and shop for groceries. Every time we would see her she would be more joyful about her life and the possibilities that had opened up for her, and…she continued to sew.

Her voice became softer, stronger and her place in the community became more obvious.

We have heard a lot about the Haitian elections this fall. Not much of it is very good news. But, it is with great pleasure that we announce that Edit is running for a position on the City Council in Anse-a-Galet.  This young woman from a small mountain village has moved to a city of 20,000, made a place for herself, and intends to make things better for her family and her community.

This is why we put paying wages ahead of paying  US staff. We may need a small staff one day, but we will always be sure that we can contribute to the economic development of the people on La Gonave, who take their salaries and make the lives of others better by investing in their community. Every time you donate to La Gonave Haiti Partners your are helping us to help others thrive and contribute to their communities. We thank you, and they thank you.

And, congratulations, Edit. You’ve got our vote!