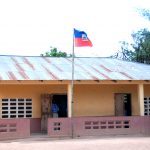 As many of you know January 1st is Independence Day in Haiti. It is, by far, the biggest holiday in Haiti. It is a day when each family gathers and eats pumpkin soup. Now, that could seem like a strange meal unless you know the history of Haiti. When the French controlled the country there was a law that only the upper classes could eat soup. It was considered a class distinction not available to the poor and enslaved. When they fought and gained their freedom, 210 years ago this year, they instituted pumpkin soup as the holiday meal to show that the country of Haiti would recognize all people as equal.

Haiti is in the news often, but seldom is it pointed out that it is the only sovereign nation in the world freed by a successful slave revolt. When it is, as many in the Caribbean will tell you, “See what it got them!”  Haiti is a complex country with a complex history, but on thing is for certain: each Haitian child knows the history of his or her freedom and how hard it was to free their country from slavery.

As a partnership we have this history at the heart of all we do. Our programs are developed from the desires of the Haitian people to continue their quest to be fee, educated and self-governing. Anyone on La Gonave will tell you their biggest desires are education, health and jobs. Nobody enjoys being seen by the rest of the world as “poor.”

At the center of the work that the partnership does with the Episcopal Church in Haiti and the people of La Gonave is education. This year our schools have grown, we have worked alongside the women’s sewing group to follow their lead and get books for each school child. This next year in a program that we hope will be jointly overseen by the partners and the parents we plan to begin a lunch program that will ensure that each child have a good hot meal while they are trying to learn. 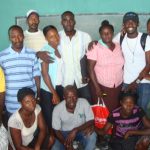 Another cornerstone for each community is the adult learning program. As one young mother told us in a meeting, “You educate our children, but we want to learn, too.”  Each of our 10 communities has a thriving adult literacy program and the impact of these classes has been to raise up new leadership. People who have not been involved in community development are newly inspired to take part in the life of their village. The classes not only teach literacy, but the value of voting, civic involvement and community development.

This year has seen a lot of improvement in the health arena as well. Many women have asked for better health care for themselves and their children. Prenatal health has been sparse and the maternal death rate has been high. The Partnership, through the generosity of all of you, helped to educate two women who have returned to the island to be midwives and establish an island wide program for prenatal health and care for the young.  We will work beside our Haitian sisters and brothers to raise up the quality of care and help them respond to the needs in their own communities. We are pleased to have Dr. Pierre Wilnique as the medical director of the Bill Rice Clinic who will be planning and implementing this program as well as the management of the clinic. Dr. Wilnique is a graduate of the St. Batolemy Episcopal School in Nan Mango (one of the mountainous communities on La Gonave) and received his medical training in Cuba. He has a speciality in epidemiology. 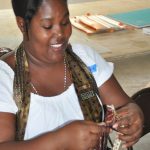 The need for economic development has never been greater and through our goat project and our women’s sewing projects we are beginning to see the rewards of having income and work on this remote island. As mentioned above, some of the women have donated income earned through sewing to provide text books for their school. Other women have taken some of the money they earned and moved their children to better schools, paid for much need healthcare or improved their families nutrition. In a rural setting such as La Gonave we are constantly amazed at how industrious the people can be with just a modest increase in income.

To do any of this work without a reverence to the hard won freedom of the Haitian people would be inhumane. We are happy to join in their continued fight for justice and the freedom to self-govern. Regardless of the history, intervening political strife or government mismanagement, the hard-working people of Haiti deserve to have partners in their fight for justice. This in no way implies a hand-out, but rather a well thought out plan for sustainable development and health that builds capital in a lasting way.

We are honored to be invited to do this work with them and everyone understands that without your support and faith in this work we would not be here. It has been a good year and with God’s blessings for the new year we are looking toward another year of development and growth for the people of La Goanve.

And, as January 1st dawns and our Haitian friends enjoy their pumpkin soup we say, “Bon Fet, zanmi nou.”  You teach us about the importance of justice and freedom everyday.