Last month, Dr. Andre Melendez of Eastside Church held an impromptu medical clinic while visiting Ticotelette.  One woman brought her baby boy, listless and coughing.  We had not planned this clinic and, therefore had minimal supplies and only over-the-counter drugs.  This little boy was clearly sick and Andre suspected pneumonia.  He told the mother to take her baby to the Bill Rice Clinic where antibiotics would be prescribed.  The woman, let us call her Martine, lowered her eyes and said that she had no money.  We assured her that the treatment at the clinic would be free.  She explained that she had no money for the transportation to take her baby to the clinic — a ride of nearly 90 minutes down one rocky dirt road and then another hour up a different road.  And then a reverse of that journey to return home.

We gave Martine a ride back to Anse-a-Galets and then gave her $30 for a motorcycle taxi up to the clinic and enough money to purchase something to eat and get back to Ticotelette.  Off she went on the back of a motorcycle, holding her baby.  Several hours later, she returned with a bag of medicines.  We were puzzled why Martine had not gone on to Ticotellete.  She explained that she was tired.  That made sense… it had been a long day and another rough ride of 1 ½ hours would tax anyone.   But why had she not used our money to purchase food? Martine said that she just wanted to spend the night somewhere in Anse-a-Galets and return home in the morning.. We are pretty resourceful folks but this stumped us.  We could not offer her a place on the compound as we are, ourselves, guests and we could not understand why she would not just return home as fatigue is a fact of life for a Haitian woman.   After an awkward silence, our dear translator Noell offered to take Martine and her baby to his home for the night—a humbling example of hospitality to the stranger. 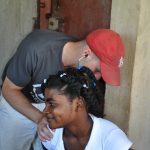 The next morning, we learned the true story.   The money we gave Martine was too valuable to just be used for her ease and comfort.  She had called her mother and asked her to ride the donkey the two hours into town to get them so that she could save the $20 and use it to buy school supplies for her children and food for her family.

Once again, we witnessed the selfless hospitality of the Haitian people, the ingenuity and sacrifice of the parents, and understood with fresh eyes that getting medical treatment or buying school supplies can hinge on just a few dollars.