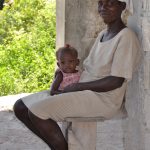 On the first workday of our trip in May we arrived at the Bill Rice Clinic full of enthusiasm about the project ahead. We had Dr. Wilnique with us and we were going to tackle the storage closets, full of supplies that needed to be catalogued and cleaned out.

By ten that morning we were summoned to come to the intake room to see a family that Dr. Wilnique was examining.

The room was crowded with the clinic nurses, nurses who were members of our team and both doctors, Dr. Wilnique and Dr. Junior. On the table was the tiniest infant I have ever seen. She was 17 days old. Bundled in clean blankets and clothing, a knit hat on her tiny head. It was hard to find her.

Dr. Wilnique explained that she was born 17 days ago, a twin, the first one who died at birth, both born at 7 months. The mother and father stood by, and their sad mood could be felt in the air. They had done all they could do and now feared that this child would die as well.

We had a pediatric nurse with us in our team and the room was electric as she tried to get a pulse and a temp on this tiny girl. No temp. Barely a pulse. The doctors quickly decided that the only chance was to get the family down the hill to the Wesleyan Hospital as soon as possible. Quickly there was money for the motor-taxi and Dr. Wilnique wrote orders for them to hand-carry.

As he wrote the orders in the other room I walked back into the room to comfort the mother and Roselie Constant went with me to translate. The mother was standing alone…very alone.

As I put my arm around her shoulder I told her that she had done such a good job of taking care of her baby. I hugged her and said that I didn’t know of any mother, anywhere, that could have kept this child alive with no help. Roselie and I were both in tears.

The mother never moved. She never looked up from her baby.

Roselie asked her if she heard what I had said. What Roselie had translated.

“Don’t you have anything to say?” said Roselie.

“No,” the mother replied. “My baby is still sick.”

Of course. What comfort was there for this woman who had been expecting their first child for seven months only to go into premature labor and lose one child and face losing the other.

Her husband stood out in the front yard of the clinic…holding his wife’s purse. Head down. He had gone out and lined up a motor-taxi and was waiting for her to come out with the doctor’s orders.

We were all devastated that evening and more so when we learned later that day that the child never made it to the hospital.

As we sat around and talked, the nurses were stunned at the facts as they unfolded. The mother had not had pre-natal care. Too far away and too expensive. She may not have known she was having twins. She was delivered at home and did not have the money to take the surviving infant for care. In the end it might not have mattered that she did not come as there is little in the way of care for premature babies.

But this child was a survivor. She had made it 17 days in the hands of an attentive mother and father. What in the world were we to learn from this?

As we talked I explained that we had two women at Midwives for Haiti in Hinche being trained to do pre-natal care and safe deliveries. We had plans for a maternal/child care program that would allow women to be seen in their own communities by their community healthcare worker and to be referred to the clinic if there was any notion that the pregnancy was complicated. That we had plans for a hand-carried record that the mothers could use to be seen at Bill Rice or at Wesleyan Hospital, whereby they would be given any follow-up treatment they needed in the way of an ultrasound or bed rest if it would protect the life of the mother or the child. That the Bill Rice Clinic was being fitted as a maternal care center where that bed rest could take place for as long as needed until a safe delivery could be managed. I told them that by this time next year we would hope to prevent tragedies like this from happening so often.

We have a plan….but it was too late for this family.

But, what we learned is that we have to push on. We cannot afford to get bogged down in the details of how we make this work. Where we get the money. How the services get delivered. This is the most important thing we can be doing to better the health of the women and children of La Gonave who currently have no access to local, affordable, dependable prenatal care.

Just before leaving Atlanta Jennell and I had been in the basement of Covenant Presbyterian packing for the trip. As we were leaving a woman who appeared to be without a home approached us for a suitcase with wheels. We took her back into the basement and found her a mid-sized and manageable rolling suitcase. As she sat on the floor of the basement and packed it she was all smiles. Looking up at me she said, “God is always on time! Yes, God is always on time!”

On the morning that the baby died I remembered that woman with the suitcase and wondered if God might not have been late for that child. Six weeks later I believe that we were all there for a reason.

Since our return there has been a renewed energy behind seeing to it that this program is in place by the end of the year.  The nurses who were with us have sustained their interest, and, with God’s help, this mother’s next pregnancy will be easier and safer.

Maybe God was on time.