Our week was full, overflowing with activities and emotions and interconnections.

To start, we had an unexpected team-building exercise, as the waters were too choppy for us to travel to LaGonave on our first day, March 16.  It was a proverbial “no room at the inn” scene and after much cajoling and looking pitiful, we were given the goat villa at Kaliko Resort.  Nine of us shared two rooms and one bathroom.  Happily, all passed this initiation with flying colors and good humor.

Sunday morning, we hopped into the flyboats, arrived in Anse-a-Galets and quickly changed for the 1-½ hour bumpy ride up to Nan Mango for church.  We arrived to joyous song – the church was filled with our friends waiting for us.  Louis Rigaud, the lay leader and school principal, had written a message of welcome to us, which led to the second round of damp eyes.  Jewell Sanders and Richard Jaynes were introduced and talked about the work of the children at St. Martin’s and Covenant in collecting over 380 pairs of shoes for the children.  We were also able to announce that we wanted to make their school as beautiful as their children.   Pere Vil lead the service and we shared communion.  Following the service, we shared a communal meal prepared by the women of Nan Mango.

Our work started bright and early Monday morning.  Shoes, shoes, shoes and shoes.  Over 350 pairs of shoes.  Children were led in by classes and a host of teachers and Covenant folks fitted each child.  Pictures do not adequately depict the terrible condition of the worn and ill-fitting shoes these children were wearing.  Shoes are an essential element of preventative health and the students of St. Martin’s and Covenant will never truly understand the magnitude of their gifts.  We also began painting.  John Greeley was quickly appointed Bossman by Artur and the volunteers began side-by-side with Artur’s team of four.  The team of four quickly grew to seven and then some of the schoolteachers wanted to help – just to be a part of the project.  The communion of working together was as powerful as the communion we celebrate on the first Sunday of each month.  All of us were pressed into service.  Slowly, the first classroom was transformed from a dark mottled concrete into a cheerful and bright room.  Somehow, the group decided that if painting one room was good, painting six rooms was much, much better.  And off we went – scraping, rolling, splattering, laughing and sharing.

Jewell was assigned a secret mission before we left Atlanta – to paint a mural.  The primary school teachers formed an ad-hoc committee and decided that a tree of life was a great idea.  Jewell’s was so beautiful that the teachers decided to paint one of their own in a different corner.  Daan, a young man who works at the compound at St. Francis, stepped up and said that he could draw and he was put to work at once to replicate pictures of children playing.  And then Adit showed Jewell an illustrated alphabet that she wanted on a different wall.  Over three days, art by committee began to grace the walls.  In the meantime (and there were so many “in the meantimes” on this trip), Francie and his crew arrived from across the road with the tables and chairs – all in primary colors—that we had commissioned for the kindergarten.  It was a magical and moving experience for all.

Among the “in the meantimes” – Jean Thony arrived one day to hold a goat clinic.  Goats and kids congregated around shady trees.  At one point it seemed that the kids (goats) outnumbered the kids (children).  Adult literacy classes were held two afternoons and we were able to sit in the room and soak in the meaning of learning how to read.  One day, we noticed a mother with a baby who appeared to be too thin – we asked her to take the baby to the community health worker.  The next day, Yvette had her hanging scales up weighing this little fellow and admitted him to the Medika Mamba children’s nutrition program.  Another day, a motorcycle pulled up delivering three boxes of Medika Mamba.  Somehow, word got out and mothers showed up the following day to pick up the treatments for their children.  In the meantime, the women’s sewing group was working on a new project for Ties that Matter.  In the meantime, the women had gone to Port au Prince to buy educational posters for the classrooms and paid to have them framed by Francie.

All of these “in the meantimes” illustrate that every thing in Nan Mango is interwoven.  It feels like a vibrant community – there are goats, woodworkers, adult classes, a children’s school, an active church, community health services.  And it also feels as though we are in community with them and they with us. 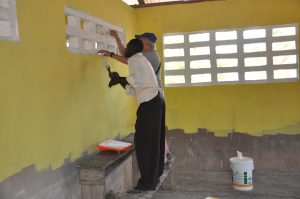