Development, like many other areas of our culture, is rife with terms. Some of them are (somewhat) easily understood. Some…not so much. When I decided to get involved with the La Gonave Haiti Partnership over 5 years ago I had no clue what many of the terms meant. Like many of you,  I decided to contribute, my time and money,  based on knowing the people involved and believing that what they were doing was sound and responsible.

Since that time I have read many books on development, long and short term mission work and how it works and doesn’t work. Last winter two of us even took a semester long course at The Candler School of Theology in an effort to make sure that our partnership efforts and programs are  based on sound principles.  So…that makes me a student at best. But, for now let’s take a look at the terms we most often hear and how they apply to The La Gonave Haiti Partnership.

SUSTAINABILITY- defined as “the ability to endure.”  This may be the term most often (mis)used and the most difficult term to apply to development work. This definition implies that entities are generating enough capital to operate independently. To use this term in development work, which exists in a climate where there is tremendous need, is odd, indeed.  It is difficult to find a project that meets the strictest definition of sustainability and even harder to find one that doesn’t claim to be doing sustainable work.  In the US programs often receive available funding like grants, government or private, and they are considered successful when they can run on that available funding. They will also tell you they are “sustainable” when they do not meet the definition. It is understood that there is a stable government and a base of donors that can be accessed to support their work. They want to see that there is an achievable goal in sight,  and they know there is a stable infrastructure to access when trying to close the gap.  This may be the definition of “good development work,” but it is not really sustainable.

I struggled with that concept  when I first got involved in Haiti. Even the goal of closing the gap seemed insurmountable. I would hear people working in Haiti talk about sustainability, but I was never sure how that could ever be a realistic goal. Even before the devastation of the earthquake the poverty and healthcare issues seemed daunting.  Paul Farmer, founder of Partner’s in Health, says it best. He declares that the work we do should be focused on things that could be sustained if and when the government rises up to take over our work. Haitians desperately wants their government to function well. They desperately want a democracy that allows all people to participate in and benefit from what Haiti has to offer. The important thing to remember is that democracy was only realized in Haiti after the election of 1990. It is a fledgling concept in a country that has endured terrible set-backs.

The La Gonave Haiti partnership is focused on long-term investment that will help the people of La Gonave fit into this struggling democracy, and provide programs that can be sustained even if we were to leave Haiti.  Our investments include education, healthcare and economic development — all the things that a functioning democratic government supports and/or provides. Haiti struggles to rebuild a government that was destroyed by the earthquake. But, when it is rebuilt, the people of La Gonave will have a system that operates and, by design, fits into the plans of the people and the government. We work to maintain contacts and relationships within the government and to follow guidelines set by them so that what we do will benefit the people of La Gonave long-term. Are we “sustainable?”  Not by the strictest definition, but neither are any of the non-profits that solicit donations, even the largest ones.  That seems to be the “buzz word” question, but it may not be as important or as realistic as the next two terms. 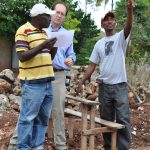 CAPACITY BUILDING-well, this is a popular buzzword! I have to say when I first heard it I was thinking of “structure.”  Not odd since pairing “build” with “capacity” would lead one to imagine a building. Not so. Building capacity is linked to sustainability. Let’s suppose the government rises up and takes on the job of supporting the schools and healthcare facilities. The success of those efforts would depend of  the number of capable and trained people with the capacity to run those programs and facilities.

Too often North American partners only view their Haitian partners as needy, dependent people who are desperate for our expertise, leadership, and money. Yet we rediscover each time we are hosted by them that they are gifted, talented, full of vision, skills, and hope. Capacity building doesn’t focus on the deficits, but works to strengthen existing skills, capacities, and God-given gifts of local residents. In this way we affirm to them, and to ourselves, that God has always been present in these communities and has never abandoned them. Capacity building and asset based community development takes seriously the resources of the individuals, of the existing associations (such as the churches, the women’s groups, other nonprofit agencies, etc.), the local institutions (such as the schools, hospital and businesses in town), the land itself, the rich local culture, and the local government, if it exists.

This is where the Partnerships shines! Unlike many NGOs in Haiti, our programs are run entirely by Haitians, most of whom are local to La Gonave. We work with Haitian doctors, nurses and teachers. We have no US citizens residing in Haiti. In the last two years we have used funds to “build capacity” by adding an Adult Literacy program and training 11 community leaders to be adult educators. We support 10 schools and all the teachers involved in the education of the children. We support 22 Community Healthcare workers, fund their on-going training and help with the necessary supplies to work within their communities. We recently sent two of our Healthcare workers to receive further training as midwives. We work with a Haitian agronomist who travels the island supporting the farmers and administering a goat program that places goats in families as a sustainable source of income. We support an out-lying clinic that is staffed solely by Haitians unless there is mission group that goes down periodically. Even then those visiting doctors work to educate and support the work of the permanent staff. We partner with Ties That Matter to train and support women’s economic development with a constant eye to making these women independent agents. The peanut product that we use for our Children’s Nutrition Program is made, in Haiti, using peanuts grown by Haitian farmers.

The vast majority  of the money we raise goes to “capacity building.”  La Gonave, long behind the rest of Haiti in terms of services and training, has made tremendous strides thanks to the involvement of the Partnership and other NGOs on the island. Which leads us to the next important word in Development. 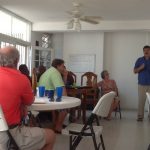 COLLABORATION: The La Gonave Haiti Partnership is one of numerous NGOs working on the island.  One of the big complaints of late has been that NGOs go to Haiti and all run their programs independently in order to gain credit and use their success as the foundation for fundraising. That is not the case with the Partnership.

In early December three people from the Partnership went to Haiti to participate in a “summit” of NGOs working on La Gonave. Among the topics addressed were healthcare, water, education, latrines and leadership development on the island. Everyone agreed that in order to be good stewards of the money entrusted to us, all parties needed to avoid the duplication of services.  This meeting was the culmination of many individual conversations with others on the island engaged in similar work as ours.

Since that time of our efforts to collaborate have grown. We now have “boards” that we share on the internet and a network of people willing to talk, email, refer and consult on new projects as well as established programs. The people of La Gonave will be the beneficiaries of these collaborations and you can be confident that your money will be judicially allocated to projects that are not being duplicated if and when that is possible.

So, all this to say, the next time someone ask you why you work with or contribute to The La Gonave Haiti Partnership you can say because they are working with Haitians to develop programs that can be sustained by local people, that build local capacity and that collaborate with local entities. If that is not enough for them, you can also tell them that we have no administrative overhead.  Are they getting that much bang for their buck!

Deborah Griffin for the Partnership

*Many thanks to my friend, Dr.David Jenkins, for his help on this article.

David is the Director of International Initiatives and Contextual Education at Candler School of Theology in Atlanta, GA