For several years we have had a program called Horns for Haiti which has worked to replace worn out instruments and donate slightly used instruments to the band at St. Francis School in Anse a Galet, Haiti. This band not only plays every Monday for the children of St. Francis to sing the national anthem and march into school, they also act as a community band for funerals and other occasions of importance.

Because of these efforts they have several good trombones, trumpets and clarinets as well as new reeds, oil and things needed to maintain the instruments. The one big stumbling block has been the tuba. Tubas are big and expensive and most parents don’t buy them for their children. They are normally purchased by schools and are not often resold.  If they are they can easily run around $2,000.  That is “french” for “out of our budget!”

For that reason we have employed many to join in our hunt for a used tuba….all to no avail. See here the tuba that St. Francis has been using: 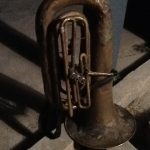 After a trip down in October we were returning to Port au Prince to fly home and on the ferry sat the tuba player from St. Francis. Talking through our friend Claude he reminded us that he still needed a tuba. I felt trapped and chagrined. I explained that we had been looking high and low and could not find a tuba that we could afford. He smiled and nodded. I felt certain that he was understanding our problem. And then, he spoke for Claude to interpret, “I know Haiti has many problems and that takes much money, but, to me, the tuba is the most important.”

It was all in good fun…but I knew he was serious under the smiles. I was resolved to find a tuba.

Upon my return I contacted Music Factory Direct in South Bend, Indiana and happened to get the nicest guy, Ken Hanson. He got the whole story…complete with the quote. After a good laugh he told me that he really liked this story and that they would see what they could do.  Within a few days he was back in touch. Seems in the back of the warehouse they had a tuba that had gone out to a school and been returned. There were no apparent problems, great condition, barely if ever used, and….the best news…they could give it to us for less than half of the cost of any tuba we had been able to find. It would come in a good hard-sided case and they could send it right along.

Well, God certainly smiles in the oddest of ways sometimes. By December we were headed back down with tuba in tow 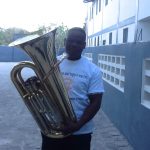 and our friend was one happy tuba player thanks to Music Factory Direct and our new best friend, Ken Hanson. And, to the friends in the partnership who helped make this happen.

Haiti still has many problems that will take a lot of money to fix…but needing a new tuba is not one of them any longer!