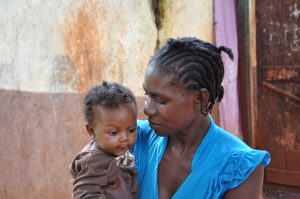 Monique -- who gave a needy friend a goat 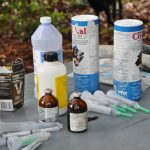 The Gift of a Goat

In early November, I had the privilege of traveling to Lotorre with Jean Thoney, the administrator of our partnership’s goat project.  He was conducting a veterinary clinic for the farmers of that community.  After a torturous and, seemingly endless, ride in the back of a pick-up trip, we arrived at Lotorre and set up shop in a shady area under the trees.  Within minutes, people began converging on the area with strings of two, three, four goats.  Several farmers had five or more goats.  The partnership starts each participating farmer out with one pregnant doe and training.  Some farmers never advance past that first goat but others are able to build a business of raising goats, and we were happy to see that Lotorre is a real success story.

Jean Thoney gathered the community under the trees and introduced us a representatives of the partnership.  He explained that the money they would pay for this clinic did not cover all expenses and the partnership provided long term financial support.  We received a touching and warm round of applause and thanks.

Over the course of the afternoon, Jean Thoney vaccinated and treated over 50 adult goats and examined countless kids.  We had the opportunity to talk to several families to find out what the goat project means to them.  We were routinely told that goats allowed families to feed their children needed meat, that goats could be sold at market in order to purchase other foods and that goats could be sold for medical expenses or for school tuition. 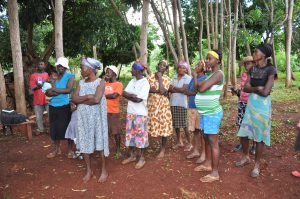 The most humbling moment of the day was when we followed a woman named Monique to her house.  She has four healthy children yet lives in a tiny, decrepit house.  Monique told us that raising goats was the primary source of income for her family and that one time she was able to give a goat to a poor friend.  Monique, who has virtually nothing, gave a goat to another needier person.  In tears, we were able to comprehend the true meaning of the goat project.  Having goats  IS economic security in Haiti. 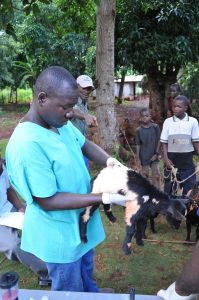