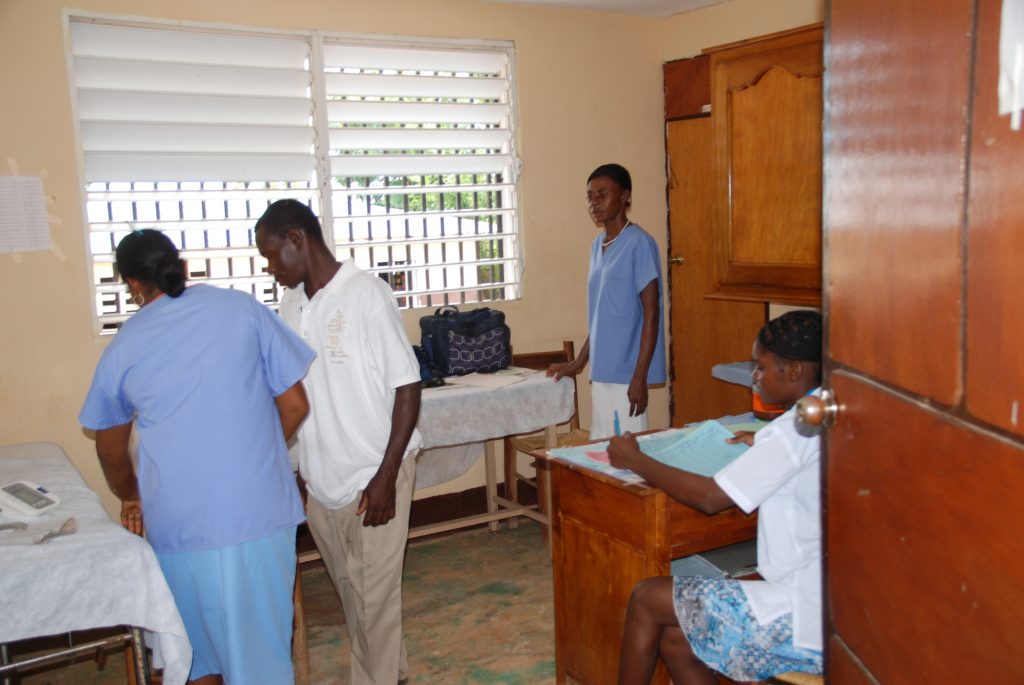 More than twenty years ago a group of Presbyterians from the Atlanta area were on mainland Haiti to teach classes in public health. They met a young priest and his wife from La Gonave, a remote island out in the bay. They were looking for someone to partner with them to bring healthcare to the people of this isolated and under served area.

The group took the time to go out into the bay and visit La Gonave. Under a tree in the church yard they decided to form a partnership and work on the problem at hand. More than anything the people wanted medical services for themselves and their children.

The La Gonave Haiti Partnership began that day. Bill Rice, from First Presbyterian Church in Atlanta and Glennis Johnson from Global Health Action took on the task of getting healthcare for La Gonave and agreed to join the other US Episcopal churches already working on La Gonave.

Bill Rice, a retired Presbyterian missionary, returned to Atlanta and began a relationship with the local priest and  the Bishop of the Diocese of Haiti to build a clinic. It would be up in the mountains, in a central location, to best serve the people. Over the next few years plans were drawn, monies raised and building materials were shipped to La Gonave by way of large sailboats. It was a huge undertaking, but it was clear that the dream would become a reality. It would be a clinic for the “poorest of the poor.”

After three years of work, just before the dedication was to take place, Bill Rice became ill and died. In yet another strange twist of fate, the Bishop, who had become a dear friend and partner over the years, also died. At the time of the dedication a huge crowd gathered. Partners from the U.S., dignitaries from the Diocese of Haiti, all there to celebrate this great accomplishment.

After a dedication sermon by the son of Bill Rice, himself a minister, the Haitian partners unveiled a sign to be hung on the clinic. It was to become the Bill Rice Clinic in honor of the man who had the vision and courage to help make it happen.

Today the Bill Rice Clinic stands as a sign of hope and health to the island of La Gonave. It is staffed by Haitian doctors, nurses, lab techs, pharmacists and other clinical staff. It is the home of the Community Health Care workers, who serve the surrounding communities, as well as housing the Childrens’ Nutrition Program. It is the site of pre-natal instruction, family nutrition and family planning.

While the clinic is kept open during the year by the clinical staff, it is also the site of medical mission teams that come in from the U.S. to see patients with special needs such as OB/GYN, cardiac and orthopedic issues.

Often patients walk for more than two hours to get to Nouvelle Cite where the clinic is located. They wait on benches for the better part of the day waiting their turn to be seen. It is not a free clinic. Patients pay a small fee to be seen as well as a fee for prescriptions. It is important that they feel a sense of dignity and participation in their own care.  But, that does not begin to meet the costs of running this important clinic.

The costs of medications alone can be in excess of $25,000 a year. Critical medications that treat malaria, tuberculosis, AIDS and malnutrition.

There is a Haitian proverb, “Men anpil chay pa lou.”  Many hands make the load lighter.

Please help us lighten the load of this important program. Healthcare is the cornerstone to productivity.

Matwones – The wisdom of Haiti

I was there recently as part of a Global Health University Trip for my class. It is phenomenal to see the great work that is in progress there as well as the many patients that can receive care in the clinic.
keep up the good work.

Thank you for your kind words, Magarie. We appreciate that you are following our work.